What does this mean Tiff? A few of you have asked.

Well, This past month has felt a little... different, right?

Something is in the air helping us to draw a line under certain things, let go of ego and grow.

These two are the biggest giants in our galaxy.

But as always, just like tarot, astrology and the workings of the universe isn’t that simple.

Every planet is a divinity in its own right, a hero with a thousand faces whether you vilify them or not, they all serve a purpose.

So here’s a tip I've found for whenever something looks like it’s at cross purposes...

Look for the common ground.

I mean, lets not forget that it’s happening on the day of the winter solstice too - or summer if you are in the southern hemisphere.

So what’s the common purpose of that extreme?

Whether it’s light returning or diminishing, a cycle has been completed.

And what’s the common purpose of the Major Malefic of Saturn and Major Benefic of Jupiter?

Saturn, the ruler of Capricorn and The Devil and The World in the Tarot is commonly known as “Satan”

The Lord of Karma, but those that know Tarot know that...

Where he may be atoning presence in The Devil…. 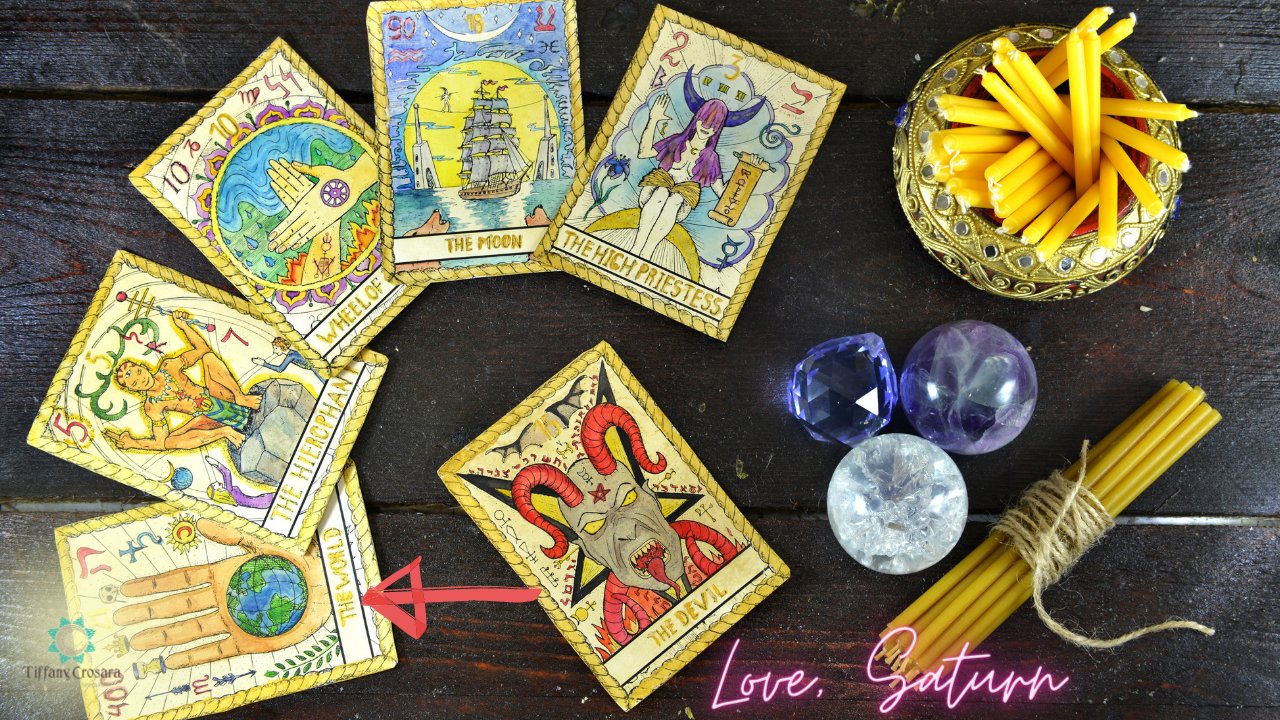 He turns into the Lord of dreams in The World.

Some astrologers say this cycle builds the world anew,  the dawning of the Age of Aquarius - where these two karmic giants meet, and I agree.

But how? With two seemingly opposing planets?

I mean where Saturn likes to restrict, Jupiter likes to expand.

Being the ruler of Sagittarius and The Wheel of Fortune in the Tarot it’s commonly known as lucky, but that’s a gross generalization and not entirely accurate.

Rather Jupiter expands whatever it touches, that age old adage about when you point at someone there’s three pointing back at you?

That’s Jupiter, that’s The Wheel of Fortune, that’s nature of Karma, all those moments before now, particularly since the last conjunction in 2000, you shall now reap back threefold.

If Jupiter is left to its own devices it can over indulge, over exert and over do.

It needs Saturn’s restriction to find the other Sagittarian ruled card in the Tarot, Temperance.

Saturn is now moving out of its own sign of Capricorn where it’s been the past couple of years giving us double restrictions in the material world and don’t we know it! It’s now time for it to “lighten up” as it meets with Jupiter in Aquarius.

The 21st card is none other than the Saturanian World - final card in the pack.

The 12th card of The Hanged Man says it’s time to cut yourself down from that you have been attached to.

The Jupiter ruled Wheel of Fortune being number 10 marks the end of a cycle - here we have a double dose twice over, the 20th card is Judgment by the way - twice as karmic as the wheel.

The karmic titans of the universe are at large and at play.

It doesn’t happen overnight and it’s not personal, it’s collective.

It’s a collective dawning of the age of Aquarius, a long awaited shift from 200 years of focus on the material world into a more humanitarian one.

Still, you are part of the collective, and resisting the change, which we can all do no matter how much we want it - is futile.

It’s time to draw the line.

Intuitives collectively pick up on a lot of needless pain and suffering, and if that isn’t rectified that goes on to create your future.

All those dreams you had for 2020 that didn’t go to plan because you were scrimping and striving from a place of ongoing low self worth?

Going against the divine plan feels like pushing a boulder up a mountain.

Letting go is terrifying because your ego wants to protect you.

But your ego is the only thing that limits you.

It’s down to you to stay awake enough to not feed it through listening to your fears.

Well, if only everything was that simple! Some fears really are there to protect us, but some are just imaginary so how can you tell?

You can draw a line in the sand and have the potency to manifest miracles now. This New Year i’m going to show you how to…

1. Open yourself up to connect, channel and communicate with the universe.

2. Understand your 2020 story, erasing misunderstandings, shame, guilt, resentment and regret so it’s not carried into 2021.

3. Work with tarot in a way that’s intuitive and transformative and not reliant on meanings or knowledge so you can trust your intuition more and watch yourself evolve with ease.

In my Brand New Manifest a Miracle a Month…

And again at the same time on New Years’ Day for part two where I’ll show you how to:

1. See what you want for your year (even if you don’t know that you do yet) giving you confidence in your co- creative power when you see it manifest :)

2. Connect to the universe and co-create your 2021 in alignment month by month so that you manifest with ease and grace.

3. Spot the months where there’s a mismatch between you and the universe and realign now so that you don’t need to learn that lesson again!

This year, I'm adding it as a workshop to double the capacity ( you’ll see there’s some 1:2:1 availability too)

Same price, same help and you learn how to do it for yourself too - bonus:) but still, there’s a limit...

Instead of 10, there’s space for 20, but 13 of those places went before I even publicised.

Are you one of the lucky 7?

1. You’ll need two decks of tarot (you can do it with one tarot or oracle deck but you increase the magic with doubling the decks of tarot)

Find out if you are one of the lucky 7 here!✨ 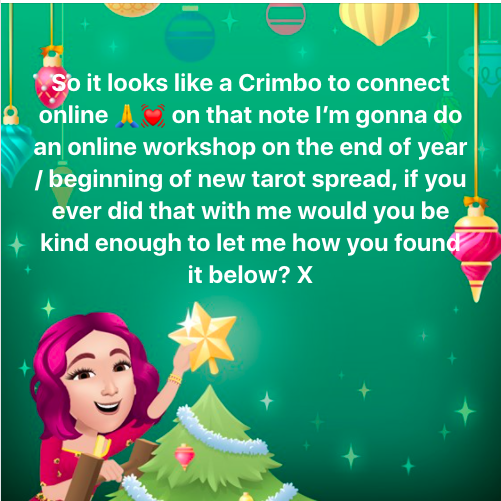 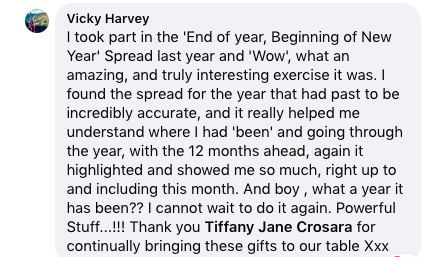 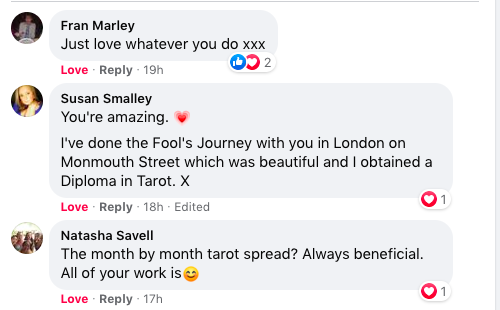 Find out if you are one of the lucky 7 here!✨

Wishing you a wonderful Christmas, Solar Eclipse, Great Conjunction and 2021!

Thank you for your kindness and custom this year,